skip to main | skip to sidebar

The epidemic of animal abuser registry proposals continues among New York Counties. Niagara County Legislature’s Minority Leader Dennis Virtuoso proposed creation of a database similar to those covering individuals who commit sex crimes. The registry would contain the names and address information for all convicted abusers in Niagara County. Repeat offenders would be assigned to the list for life. County Sheriff James Voutour, whose office would be responsible for monitoring and updating, supports the registry. The registry is based on the Orange County law. Orange County lawmaker Mike Anagnostakis introduced the registry proposal earlier this year which passed the Legislature in August. County residents over 18 years of age convicted of an animal cruelty crime must be listed on the registry and cannot own another animal for 15 years. The registry will be maintained by the County sheriff.

According to a report by Mid-Hudson News, out of several New York counties that have passed animal abuse registry laws only 3 have actually been implemented. If true, this is good news. Perhaps this means that after rushing to appease activists by passing a registry law, legislators had a renewed moment of common sense.

Thank you for reading. Cross posting is encouraged.

EPA WAS WRONG TO APPROVE DOW PESTICIDE HARMFUL TO BEES
September 10, 2015. A U.S. appeals court ruled on Thursday that federal regulators erred in allowing an insecticide developed by Dow AgroSciences onto the market, canceling its approval and giving environmentalists a major victory. The ruling by the U.S. Court of Appeals for the Ninth Circuit, in San Francisco, is significant for commercial beekeepers and others who say a dramatic decline in bee colonies needed to pollinate key food crops is tied to widespread use of a class of insecticides known as neonicotinoids. Critics say the Environmental Protection Agency is failing to evaluate the risks thoroughly. The lawsuit was filed in 2013 against the EPA by a number of organizations representing the honey and honey beekeeping industry. The groups specifically challenged EPA approval of insecticides containing sulfoxaflor, saying studies have shown they are highly toxic to honey bees.

USDA said earlier this year that losses of managed honeybee colonies hit 42.1 percent from April
2014 through April 2015, up from 34.2 percent for 2013-14, and the second-highest annual loss to date. Continue reading http://tinyurl.com/nq2u7ru

US COURT OVERTURNS ESA LISTING
The U.S. District Court for the Western District of Texas Sept. 1 overturned the U.S. Fish and Wildlife Service (FWS) listing of the lesser prairie-chicken under the Endangered Species Act. Ruling in favor of the Permian Basin Petroleum Association and four New Mexico counties, the judge concluded the listing was arbitrary and capricious, and that the USFWS failed to properly follow its own process for listing determinations in this matter. Further, conservation efforts have already been undertaken across millions of acres over five states to improve habitat for the lesser prairie-chicken and diminish threats to its existence. The court determined these conservation efforts, which have resulted in a 25 percent increase in lesser prairie chicken populations from 2014 to 2015, were ignored by the administration. In a 29-page ruling, U.S. District Court Judge Robert Junell stated, “The Court finds FSW did conduct an analysis, however this analysis was neither ‘rigorous’ nor valid as FWS failed to consider important questions and material information necessary to make a proper … evaluation.”

GROUPS FILE PETITION WITH FOOD SAFETY AND INSPECTION SERVICE
Animal Legal Defense Fund, Compassion Over Killing, Farm Forward, Farm Sanctuary, Mercy for Animals, and People for the Ethical Treatment of Animals, filed a rule making petition this month against USDA’s Food Safety and Inspection Service (FSIS) calling for additional regulations under the Humane Methods of Slaughter Act (HMSA) and Federal Meat Inspection Act. The coalition claims the FSIS is not meeting its statutory obligations under HMSA. The petition states the group based its claims on undercover investigations conducted by animal welfare groups and government reports. Requested changes include, codify the definition of “egregious” violations of the HMSA; issue Notice of Suspension for all egregious violations of the HMSA; require that intentional cruelty and egregious and reckless abuse be referred for criminal prosecution, fines, and imprisonment.

One proposed change calls for mandatory enforcement standards for Noncompliance Records (NR) and suspensions. For example, multiple stuns would always result in at least a plant suspension. The North American Meat Institute (NAMI) argued that adopting such a rule change would limit the ability of plants to take action when needed. “USDA’s Food Safety and Inspection Service wisely has permitted plants that acknowledge in advance through written plans that some animals, like large bulls or mature dairy cows, may be difficult to stun with a single blow as the law’s language requires,” Mark Dopp, senior vice president of regulatory affairs and NAMI general counsel, said in a statement. “FSIS’ approach also recognizes that livestock don’t always stand perfectly still and human beings charged with stunning and handling can’t executive every movement perfectly 100 percent of the time. If the agency is forced to use a regulatory sledge hammer when a plant does the right thing — like double stunning an animal when it appears necessary — it will only mean the wrong thing will happen more often — like failing to ensure an animal feels no pain.” Dopp continued. “During the time period detailed in this petition, our industry processed nearly 300 million cattle, pigs and sheep. While we work to ensure optimal welfare, perfection is simply not possible. Still, our overall record is one that reflects a committed, well-regulated and carefully inspected industry.” Sources: ALDF website; MeatPoultry.com

SEA WORLD OF TEXAS VS PETA
Sea World of Texas is rejecting the latest allegations raised by People for the Ethical Treatment of Animals (PETA), that the killer whales and sea lions at the park show signs of abuse and should not be held in captivity, News Radio 1200 WOAI reports. "I have to tell you, this is the ninth time in the past two years that PETA has filed claims about our animal welfare, and none of those claims were found to have any merit," Sea World Director of Corporate Communications Becca Bedes told News Radio 1200 WOAI's Megan Bishop.  "This is no different."  Source: WOAI http://tinyurl.com/o8xdyfk

ANIMAL RIGHTS GROUP SAYS IT WILL BILL INHOFE FOR DOWNED DRONE
September 14, 2015. An animal rights group said in a press release Monday that it plans to bill U.S. Sen. Jim Inhofe for a drone that was shot down Friday while being flown over the Tulsa Republican's annual pigeon-shooting fundraiser. The Illinois-based group, SHowing Animals Respect and Kindness, or SHARK, was using the drone to monitor the event "for possible violations of Oklahoma law," and said it would release video of the shootdown and crash on Tuesday. SHARK said it would hand deliver a bill to Sen. Inhofe's DC office and file an amendment to SHARK’s ethics complaint against Sen. Inhofe "for the illegal and dangerous discharge of a firearm with his knowledge and potential consent." The complaint will be delivered to the offices of all the members of the Senate Ethics Committee, the group said.  Read more including SHARK press release http://newsok.com/article/5446774

MANDATORY SPAY NEUTER ORDINANCES
Mandatory spay/neuter (MSN) laws are promoted by groups who claim it will end euthanasia of animals, animal abandonment and shelter overpopulation. There is no success story for mandatory spay/neuter yet legislators still fall prey to the belief in a legislative quick fix.  Flyers opposing MSN can be found on the SAOVA website http://saova.org/download.html . Congratulations to the dog owners and groups who defeated recent attempts for MSN legislation.
* Whittier CA City Council removed MSN from a new animal ordinance which passed by a 5-0 vote.
* Proposals for MSN and Breeding Permits were presented for consideration to Spalding County GA Board of Commissioners at their August 3, 2015 meeting and both items were tabled.

San Angelo TX council held a public hearing for proposed MSN ordinance which would require dogs and cats older than 4 months to be sterilized. Exceptions to the proposed ordinance include permitted/licensed breeders, medical reasons, competition animals, and law enforcement dogs. The ordinance will be considered at council’s October 6th meeting. 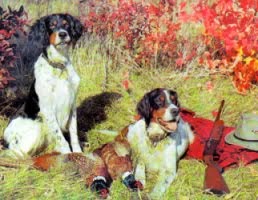